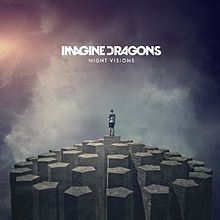 Night Visions is the debut studio album by American rock band Imagine Dragons. It was released on September 4, 2012 through Interscope Records. Recorded between 2010 and 2012, the album was primarily produced by the band themselves, as well as English hip-hop producer Alex Da Kid and Brandon Darner from the American indie rock group The Envy Corps. It was mastered by Joe LaPorta. According to frontman Dan Reynolds, the album took three years to finish, with six of the album’s tracks being previously released on multiple EPs. Musically, Night Visions is primarily an alternative rock and indie rock album, however, it also uses influences of dubstep, folk, hip-hop and pop.

The album debuted at number two on the Billboard 200 in the United States, selling more than 83,000 copies within its first week. It also peaked at the summit of the Billboard Alternative Albums and Rock Albums charts, as well as in the top ten albums in Austria, Canada, Germany, Ireland, Norway, Portugal, Scotland, and United Kingdom. The band promoted the album by touring the United States in fall 2012, as well as touring Europe in November. Currently, they are performing a headlining tour in support of the album.