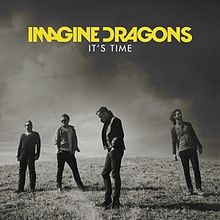 It’s Time is a song by American alternative rock band Imagine Dragons, from the band’s major label debut EP Continued Silence as well as their major label debut album Night Visions. “It’s Time” is an indie rock song, and its lyrics describe how one should never change who he or she is.

After the song was covered on Glee and heavy rotation in commercials and television shows, the song received commercial success and reached number 15 on the Billboard Hot 100, making it their first Top 40 single, as well as number four on the Alternative Songs chart and number three on the Rock Songs chart. It holds the longest run on the Billboard Alternative Top 10 for 2012 with 32 weeks. The single reached the top ten singles in Austria (#6), Belgium (#1), Czech Republic (#10), and Billboard Pop Songs (#10). It was certified 2x Platinum by the RIAA and Gold by the ARIA. It was also nominated for Best Rock Video at the 2012 MTV Video Music Awards. The single enjoyed extensive radio airplay in the United Kingdom in spring 2013 and eventually became their first Top 40 hit in the UK singles Chart, peaking at #40.