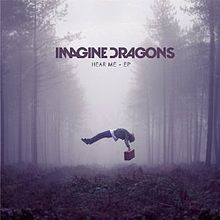 Hear Me is an extended play by American indie rock band Imagine Dragons, released in the United Kingdom and Ireland on November 25, 2012.The EP was released to precede the release of the band’s debut studio album, Night Visions in Europe, ala the Continued Silence EP in North America. The EP features “Hear Me” as the title track, and three other tracks from Night Visions.