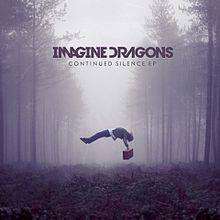 Continued Silence is an EP by Las Vegas rock group Imagine Dragons, released digitally on February 14, 2012 in the United States. It was recorded at Westlake Recording Studios. All songs were written by Imagine Dragons and produced by Grammy winning producer Alex Da Kid. All songs were mixed by Grammy winning engineer Manny Marroquin as well as engineer Rich Costey. The EP was mastered by Grammy winning mastering engineer Joe LaPorta.
All of the songs on Continued Silence have been featured on the band’s debut album Night Visions except for “My Fault” and “Round and Round”, and previous purchases of songs from the EP will count towards Night Visions and drop its price.