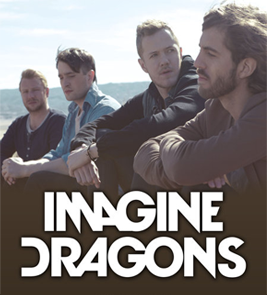 Imagine Dragons are an American alternative rock band from Las Vegas, Nevada that gained exposure after their debut studio album, Night Visions in September 2012. Since then, they have gone on a world tour, played on major late night shows like Jimmy Kimmel and Jay Leno, and Rolling Stone magazine called their single “Radioactive” the biggest rock hit of the year.

Lead singer Dan Reynolds, a Las Vegas native, met guitarist Wayne “Wing” Sermon in 2008 in Utah, where Dan was attending school and Wayne was living after graduating from Berklee School of Music. After going through various lineups, the band was established in Las Vegas with Dan and Wayne joining Ben McKee, Andrew Tolman, and Brittany Tolman. The members lived together in Las Vegas, where they recorded and released their first three EPs.

The band released two titled Imagine Dragons and Hell and Silence in 2010, both recorded at Battle Born Studios. They returned to the studio in 2011.Another EP, It’s Time, was made before they signed a record deal.

Early members Andrew Tolman and Brittany Tolman left the band in July 2011 and were replaced by current drummer Daniel Platzman. Imagine Dragons was signed to major label Interscope Records in November 2011.[19] They worked closely with producer Alex Da Kid with whom they recorded their first major label release at Westlake Recording Studios in West Hollywood, California. An EP entitled Continued Silence was released on Valentine’s Day (February 14, 2012) digitally and peaked at #40 on the Billboard 200.

Shortly after, “It’s Time” was released as a single and peaked at #15 on the Billboard Hot 100. It holds the record for the longest run on the 2012 Alternative Top 10 charts. The music video debuted on April 17, 2012 on all MTV affiliates and the band was named MTV PUSH Artist of the Week. The video was subsequently nominated for an MTV Video Music Award in the “Best Rock Video” category. “It’s Time” was certified a double platinum single by the RIAA and gold by the ARIA.

The band finished recording its debut album Night Visions in the summer of 2012 at Studio X inside Palms Casino Resort and released the album in the United States on the day after Labor Day (September 4, 2012). This album contains the popular song “Radioactive”. It peaked at #2 on the Billboard 200 chart with first week sales in excess of 83,000 copies, the highest charting for a debut rock album since 2006. The album also reached #1 on the Billboard Alternative and Rock Album charts as well as the top ten on the Austrian, Canadian, German, Irish, Norwegian, Portuguese, Scottish, and United Kingdom Albums charts. Night Visions is certified gold by the RIAA as well as in Canada, Norway, and Sweden. To date, the album has produced three tracks charting in the Billboard Hot 100 and four tracks charting in the UK Top 40. It has thus far produced at least two Top 40 singles in the US, UK, Austria, Belgium, Canada, Germany, New Zealand, Sweden, and Switzerland. Second single “Radioactive” reached #1 on the Billboard Alternative Songs, Billboard Rock Songs, and Swedish Singles charts and has been certified double platinum in Denmark, Norway, and the United States. It is the band’s second single on the Billboard Hot 100 and peaked at #7 becoming their first top ten single in the United States.

Billboard listed them as one of “2012’s Brightest New Stars”. Amazon.com called the band their “Favorite Rock artist of 2012”.

Imagine Dragons has performed “It’s Time” live on The Tonight Show with Jay Leno (2012) and Jimmy Kimmel Live! (2012) and Late Night with Jimmy Fallon (2012), and Conan (2013). They performed “Radioactive” live on Jimmy Kimmel Live! (2012), The Late Show with David Letterman (2013), and The Tonight Show with Jay Leno (2013). They are scheduled to perform on Good Morning America on July 5, 2013. Imagine Dragons took a tour around the United States, Canada, and many countries in Europe, featuring their album, Night Visions in 2012. The tour sold out with the exception of two nearly sold out shows.

In 2013, along with the family of Tyler Robinson, they started a charity named The Tyler Robinson Foundation, helping young people battling cancer.